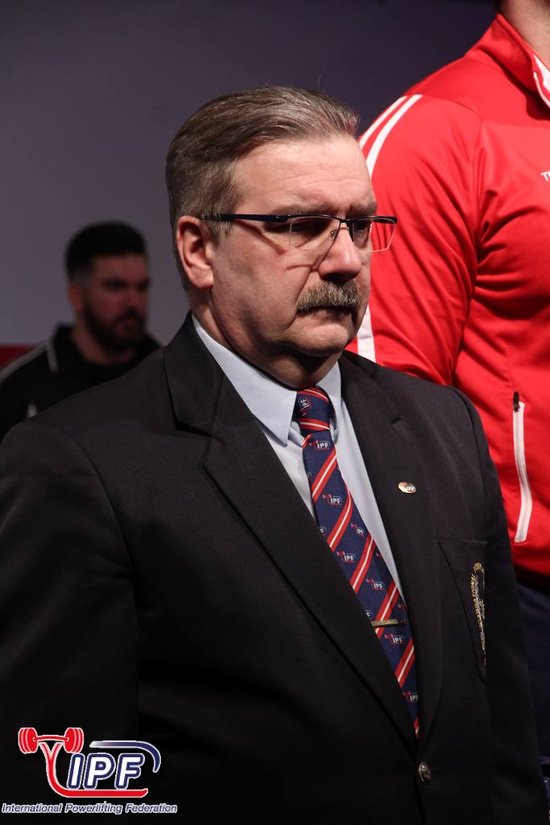 I departed Luxembourg on Monday, June 4 to Calgary to attend the World
Classic Powerlifting Championships and returned on Monday June 18, 2018 --
As you can see, this year's championships took us a solid two weeks to
direct. Of course, this does not include the set-up and breakdown of the
organizer. This year's competition was extremely successful with 750 lifters
from 52 Nations from all six continents to compete in Calgary.

The competition started with the Masters Category I - IV. As always the
masters athletes are serious about finishing in the medals at the World
Championships. However, the athletes come and enjoy the championship as a
reunion with their friends from around the globe. Most importantly, they
come to have fun! Often times, the masters teams travel to the competitions,
with no coaches, and no referees. No matter, they support, coach and referee
to ensure the success of the competition. Bill Helmich one of the USA's best
master lifters refereed the entire two weeks. Overall the results were
exceptional and many of the lifters attended the masters farewell banquet.

After the master lifters departed, the Sub-junior and Juniors lifters
arrived for the competition. Overall, they had great results with a large
number of Sub-Junior and Junior World Records broken. We have a great future
ahead of us. It was a pleasure to see all of them, especially Special
Olympian Steven Gassert who secured a silver medal in the 66.00 kg
sub-junior weight class. This is what the SOI and the IPF want see --
unified sport where all are welcome to come and lift -- Steven Gessert's
performance was an exceptional example of this ability to unify our sport.
We enjoyed this very much and hope that we see more Special Olympic Athletes
in the future at our World Championships. We had a very nice closing banquet
together as well with the Juniors.

The last 5 days of the Classic World Championships were simply amazing with
arrival of our open lifters. We witnessed multiple world records and close
finishes, often times decided on the last deadlift, in nearly every weight
class. For example, in the 105 kg weight class, we witnessed three
successful world records on third attempt bench presses, separated by only
0.5 kg, all receiving white lights. The excitement had the crowd standing
between attempts continuously cheering each lifter on each attempt in the
group. Simply electric!

Our newest VIP Partner and some of the new manufacturer were quite impressed
by the high standard of lifting and are excited to continue with us to bring
our sport forward.
Our Media Team performed exceptionally well. Overall, 2.4 Million viewers
via Face book and YouTube tuned in for a spectacular World Championships.

The days were long for the IPF EC members, media team and most importantly
the referees. There truly unselfish work created a very successful and
historic championship. One we will remember for a very long time. Special
thanks, once more, go to all the coaches, referees, media team, speakers,
scoring manager, our VIP partners and manufacturers for their support. Most
importantly, I want to thank the loaders who worked extremely well to ensure
the safety and security of the lifters. Your work is appreciated and the
championship would have not been the success it was, if it was not for your
extraordinary work.

The IPF had a very successful meeting with the Australian Powerlifting Union
(APU) in Calgary. We're looking forward to having an inter-regional
Powerlifting Championships this year. The Asian - Pacific championships that
will be held in Australia.

I want to offer my personal thanks to our newest VIP Partner APLYFT who
signed a contract with the IPF in Calgary. We look forward to having them
work with us to bring the sport of powerlifting to the higher level. The IPF
has signed also a contract with Emanuel Scheiber, the IPF Consultant. I want
to thank Emanuel for his great work by signing and bringing on board APLYFT.

The VIP Partners shall support our regional federations by providing 15.000
€, per region, starting in 2019 to ensure the regional championships are
directed at the highest level possible.  The IPF shall continue to send
Eleiko Equipment to each region as well. We shall also begin to organize
more coaching and referee clinics for the member federations in each region
to ensure their success. I'm pleased to see the NAPF doing this work on
their own -- at one of their most recent development seminars they provided
an administrators workshop, marketing and media seminar, as well as a
coaching/lifting seminar. Also included was a an Anti-doping seminar not
only for the newly formed national federation, but for all of the sports in
the country. The IPF EC will ensure this work is complete and most
importantly shall make sure the monies given to us by  our VIP Partners will
be spent wisely and go back into the sport.

The IPF shall be as transparent as possible to ensure the good governance of
our sport. Everyone can see the IPF reports and finances on our website. We
expect in the future this same transparency from both our regional and our
member federations. Transparency and good governance are two major and major
points to achieve IOC recognition.

The IPF has decided at the last congress in Pilsen that all anti-doping fees
collected by the Regions shall be sent to the IPF account. In turn, the IPF
shall pay for all of the sample collection, shipping and lab analysis costs.
How will this be done? We shall work with each member federations National
Anti-doping Organizations that is organizing and directing either an IPF or
Regional Championships. The WADA criteria will be followed as requested by
them and therefore it is necessary the collected-fees Regional and IPF need
be used to follow the requirements set for us.

Thanks to the Canadian Powerlifting Union (CPU) and to the organizer and his
team for a job well done. I hope that everyone had a safe trip home. I
looked for forward to next year’s Classic World Championships in Helsingborg
Sweden. Most likely, there will be a possibility of 1000 lifters from 60+
countries. Start preparing now.