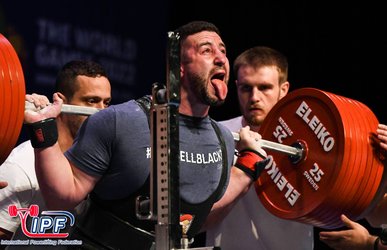 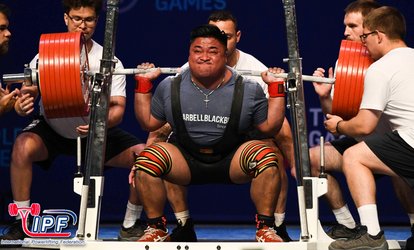 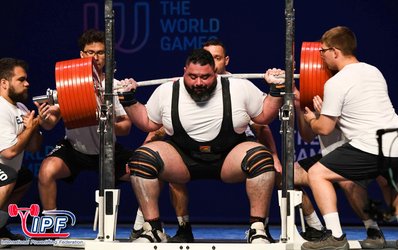 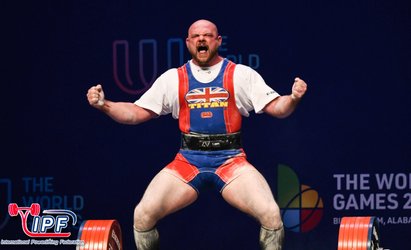 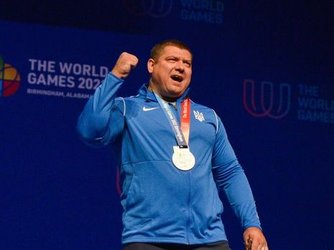 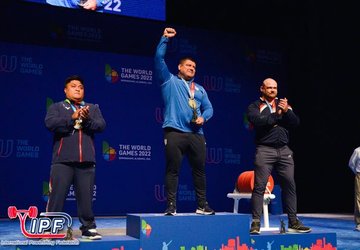 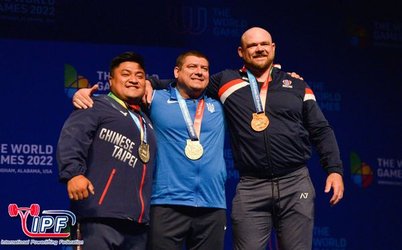 The very last session of The World Games 2022 was the men’s superheavyweight class – the 120 and 120+ classes and the BJCC Concert Hall was packed to see the big boys move ALL the weight.

Sen Yang of Chinese Taipei opened with 425kg – only 5kg off the current world record standard. He exceeded the record in Stavanger but unfortunately bombed on deadlift at that competition and so lost the record. 425kg moved so easily – surely he would secure the record today. It was certainly enough to take him into first place with Sofiane Belkesir of France and Taipei’s Chi-Sen Tien well matched just behind, both having taken 405kg for a ride.

Belkesir took a nice looking 415kg for his second squat.. Tien was next out for 417.5 and it was a smooth lift, putting him only 0.16 points behind second place. Yang asked for 440kg for his second to put 10kg on the world record standard. Unfortunately, he couldn’t keep control of the weight and had to re-rack with only a few seconds left on the clock. Yang tried for the 120kg world record again with 440kg and made it look so easy, you had to wonder what happened the first time around.

Yang maintained his lead through bench press but Belkesir struggled, only getting a bench in on his third try, leaving him a long way down the rankings. Oleksiy Bychkov of Ukraine moved into contention and third place with his 320kg opener and his second of 332.5kg moved him up to silver medal position ahead of Tien. Meanwhile, Yang smoked his 3rd bench at 322.5kg, establishing a clear lead of 4 GL points – Bychkov replied with a fast 340kg to close the gap a little.

In deadlift, Yang came under immediate pressure from big deadlifter, Bychkov, who opened 40 heavier with 355kg and moved straight into the lead. Meanwhile, GBR’s Tony Cliffe moved up to third place with his opening pull of 350kg, pushing Tien out of the medal placings.

In the second round, Yang hit 322.5kg to re-take the lead and it was fast, showing a lot of promise. Tien took 347.5kg to get past Cliffe and regain the bottom step of the podium and it was a strong pull but Cliffe responded with 365kg and knocked him back down again. Bychkov’s easy looking 372.5kg deadlift took him back into gold medal position and everything came down to the final deadlifts. As it should be.

Into the kingmaker round and Yang pinned his hopes and dreams on 332.5kg being enough to hold off the Ukrainian. It was a great pull, putting the demons of Stavanger behind him, and now all he could do was wait to see if he would keep the top step of the podium or whether he would gradually slide down the rankings.

Tien’s 355kg was a really well judged third attempt and he got one toe on the bottom step of the podium with Cliffe still to pull. Cliffe was calm in his approach to 370kg but roared at the crowd in triumph when he nailed it, guaranteeing him the bronze. With the top two positions still to sort out, Bychkov made 375kg look just as easy as all the rest to take the superheavyweight World Games gold medal by 0.24 GL points and push Yang down to silver.

This was an exciting finish to an incredible competition and it was fantastic to see such a big crowd in attendance to watch the pinnacle of equipped powerlifting at The World Games 2022 in Birmingham, Alabama.