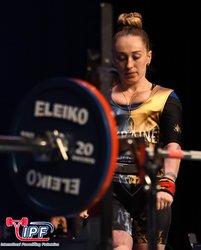 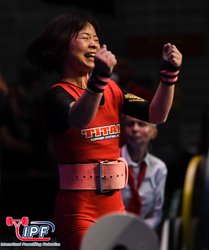 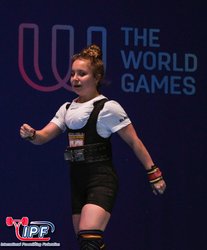 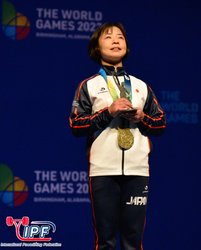 Our first session at The World Games in the BJCC Concert Hall in Birmingham, Alabama was the lightweight women. This weight class covers the more usual 47kg and 52kg and is scored on GL points – the IPF’s own formula designed to compare lifters of different bodyweights and based on a function of bodyweight and weight lifted.

The current junior world champion, Zuzanna Kula of Poland came in hot with a 200kg squat for her opener but the lift was turned down by the jury. She nailed it on her second though and took the junior world record in the 52kg class. This was enough to move into the lead with 41.43 GL points. Two Ukrainian lifters were right behind – Tetyana Bila squatted 187.5kg for 40.63 GL points and Anastasiya Derevyanko took the same weight for 39.14 GL points.

Open World Champion, Yukako Fukushima of Japan, impressed in bench press, opening on 120kg and absolutely smoking it, moving her into the lead. Kula came out next for the same weight and jumped ahead by only 1.5 GL points. Fukushima called for 125kg next to match her own M2 world record and it looked just as easy as her first but Kula benched the same to stay ahead.

Into the third round and Karen Hesthammer of Norway moved up to fourth place with her third and only successful bench of 102.5kg. Fukushima improved her own M2 bench world record with 127.5kg but, once again, Kula managed to stay ahead with 130kg.

Kula led the way going into deadlifts but, as is often the case with a lifter with a big sub-total, Kula was first out on deadlift for 137.5kg and Fukushima took the lead with her 155kg opener. Derevyanko made short work of her 167.5kg opener and this was enough to move up to second place temporarily. Kula pulled 157.5kg for her second deadlift – a 20kg jump – which was enough to move her into first place again but only by the narrowest of margins – 0.22 GL points with Fukushima still to pull. And pull she did, with a lovely 165kg.

Into the third and final round of deadlifts and Kula approached the bar for 167.5kg to retake the lead. It was a fight but she got it. Fukushima was out next and pulled a triumphant 170kg for a new M2 deadlift world record and gold medal position, pushing Kula down to second place. Derevyanko then took 180kg to cement the bronze medal.

A phenomenal first session at The World Games 2022.