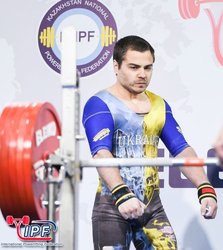 Day 3 of the World Classic and Equipped Bench Press Championships started with the lightweight open classes and the big story was the Kodama-Chuprynko rematch. Japan’s Daiki Kodama is the undisputed master of bench, both in equipped and classic and has been at the very top of the sport for two decades. Ivan Chuprynko of Ukraine had twice been world champion in the 66kg class but when he moved up to the 74s in 2018, he found that the top step of the podium was perennially occupied by Kodama. They went head to head in the equipped competition in Lithuania last year and the unbeaten Kodama took the win. However, history was made in the classic competition when Kodama struggled and Chuprynko took gold.

This year, Kodama came into the competition lighter in bodyweight which meant that he only had to match Chuprynko to win – however, with the lower lot number, he would have to go first if he selected the same weight. Chuprynko took 280kg for his opener and Kodama responded with 282.5kg. Both requested 292.5kg for their second – was this a strategic error on Kodama’s part? The lower lot number meant he would have to go first. However, the bar ground to a halt halfway up and he could not complete the lift. Chuprynko took the same weight – it flew off the chest but the lockout was tough. Nevertheless it was a successful lift and the Ukrainian moved into the lead.

Some gameplaying went on with the third attempts – both initially asked for a world record attempt of 300.5kg but ultimately it was 295kg that Kodama came out for. Although he handled the weight well and displayed his usual technical mastery, the bar stalled not far off the chest and Kodama’s world championship title bid slipped away. The master was deposed and a new era begun.

Chuprynko, no longer defending, already the world champion, was free to attempt the world record at 300.5kg. The descent was very controlled and the press started off really well, getting most of the way to lockout before grinding to a halt and going no further.

Daiki Kodama showed real sportsmanship on the podium. It must have been a bitter pill to swallow to be beaten now in the equipped championship but you would never have known it from his demeanor. He raised Chuprynko’s hand in a victory gesture and proudly displayed his silver medal as he left the platform. A true champion to his core, even now.