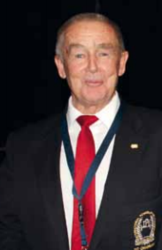 On Friday, October 12, 2018 a dear friend and former colleague, John Stephenson, from Great Britain passed away on the Island of Jersey.

The highly respected and well-regarded John Stephenson served as the Technical Chairman for the International Powerlifting Federation for well over 20+ years. John was inducted into the IPF Hall of Fame in 2001. He was instrumental in preparing and fine-tuning the modern day rules of Powerlifting. Up until his death, John continued to train regularly with weights. Mr. Stephenson was involved with not only powerlifting, but bodybuilding and weightlifting for 65+ years.

Until his retirement from the IPF, John was very proud that he attended every IPF Open World Powerlifting Championship. Without question, Mr. Stephenson served our sport with both honor and distinction.

On behalf of Gaston Parage, the President of the IPF, and the Executive Committee members, as well as the entire world-wide powerlifting community, we send to John’s family and many friends our sincerest condolences.

John will be remembered in both our thoughts and our hearts. May he rest in peace.