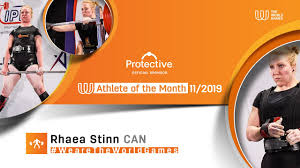 as per last 4 years, also this year an IPF lifter is nominated for the Ahtlete of the Year Award in the IWGA.
This year the Canadian Rhaea Stinn, who is already the IWGA Athlete of the Month November

is the IPF’s candidate for the Athlete of the Year award.

In the resent years the nominated lifters from the IPF were always very close to win the voting but resulted in second place only for a few votes.

To avoid ending up again on the second place, we encourage all of you to send this information’s below to all your members and encourage them to vote for Rhaea.

To win this very prestigious award will give not only the lifter but also the whole sport a big awareness in the international sports community.

Please read all instructions below very carefully and follow the instructions. Please be also aware that only the 10 highest ranked athletes will continue after the 20th January for the “Big Final” until 30th January!

You can vote for your candidate once every 24 hours.

First, give two votes to your favourite candidate by clicking on their "Vote" button.

Then, to make your vote count, click on the "Vote" button of your second favourite candidate which will then receive one vote.

The candidates will be published on 7th January 2020.

The names of the candidates for the World Games Athlete of the Year 2019 will be published on 7th January 2020.

From Monday 20th January 2020 at 16:00 CET, only the 10 highest ranked candidates at that time will continue in the race. They will keep the votes earned by then.

The winner and runners-up will be announced on 30th January 2020.

You can give your votes to the candidates on The World Games website once per 24 hours. Votes must be given each time to two candidates: 2 votes to your first-choice candidate and 1 vote to your second-choice candidate. If you try to give votes to one candidate only, the votes will not be registered.

The numbers of votes cast for each candidate will be visible throughout the campaign.

All voters shall act in accordance with fair play in sport. The IWGA will scrutinise the voting process closely, and any anomalies that appear will be investigated. Any conduct that is against the sporting spirit may result in consequences.