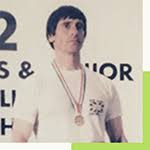 It is with great regret that I inform you on the passing of British Powerlifter Roger Powell.

Roger had a stellar powerlifting career with his first competition coming in 1967. Over his early career, Roger was a 4 time Silver Medalist, and 3 time Bronze Medalist in the British Open National Championships. Roger found most of his success when he entered the Masters category, and won the British Masters Championship a minimum of 20 times, and won the IPF World Masters Championship 9 times, along with 1 silver and 2 bronze medals. One of Roger’s proudest moments was his victory against Precious McKenzie at the IPF World Masters Powerlifting Championships in Sydney, Australia.

As reported by James Brincat-Smith, Roger trained in a shed he built located behind his house with an old bar, with no knurling, made of copper.

Roger also served as the British Powerlifting President for several terms, and for a time, was also an active international referee.

It goes without saying, Roger loved the sport of powerlifting, and last year, was inducted into the British Powerlifting Hall of Fame. This honored was well deserved.

On behalf of the IPF Executive Committee, we send our sincerest condolences to Roger’s family, friends and to the entire British Powerlifting community.

Roger rest in peace. We shall miss you.