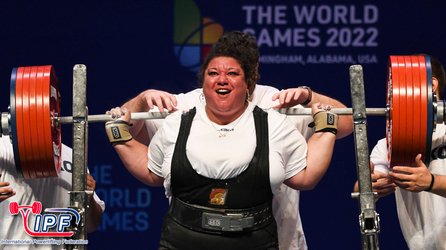 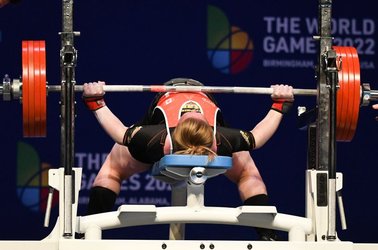 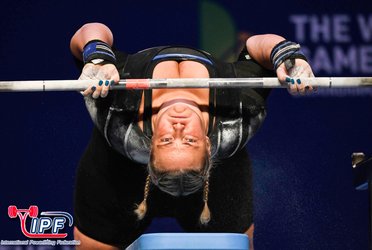 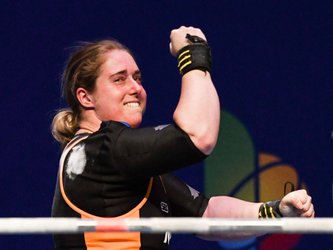 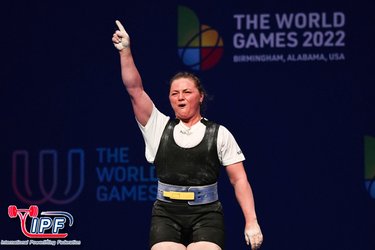 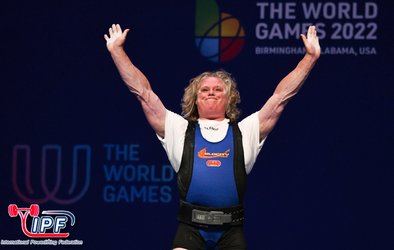 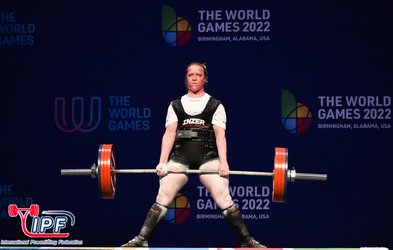 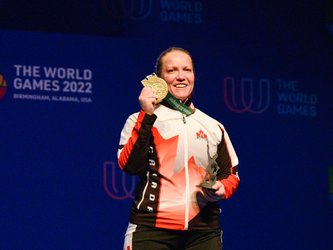 We kicked off Super Sunday at The World Games 2022 with the Superheavyweight women – the 84kg and 84+kg classes.

After the opening round of squats, the scoreboard was a sea of green – something not often seen in equipped lifting. Superheavyweight queen, Bonica Brown of USA, opened with 300kg and pushed all the way up to a new 84+kg squat world record at 322.5kg to the rapturous applause of the home crowd.

Ukraine’s Tetyana Melnyk opened with 255kg but couldn't improve on it - failing to stand up with 265kg and then cutting depth on her last. Still, this was enough for second place going into bench.

Melnyk’s bench press opener of 170g was very easy and promised more. Bench world record holder, Rhaea Stinn of Canada, got 215kg on the board – it wasn’t super easy but it was enough to put her in the lead. Last out to bench was Norway’s Hildeborg Hugdal – current world record holder in the superheavyweight class. It was a tough lift but it shot her up the field into third place.

Melnyk, sitting in second, took 180kg for a spin and it shot to lockout. Brown took 210kg again, having missed it first time around – it was a difficult touch but, once she got it down and got the command, it sprang to arms’ length in an instant and Brown moved up to second. Stinn took 223.5kg to extend her own world record and her lead in the competition. Hugdal tried 228.5kg for the 84+kg world record but the lift was overturned by the jury for downward movement to the audible disappointment of the crowd.

In the final round of bench, Melnyk moved 185kg like an opener – it wasn’t enough to change her position but maybe enough to hold off Hugdal. Brown took a conservative jump to 215kg – surprising perhaps, given how fast she was with 210 and, indeed, 215 was super fast again, suggesting that more would have gone. Stinn next to push her world record on even further with 227kg and, although it was a little scrappy, it went all the way, putting her a couple of GL points clear of Brown. Last bench of the session went to Hugdal and this time she nailed 228.5kg for a new world record but stayed in fourth place.

Tension mounted as we moved into deadlift. Stinn took 195kg to open and looked comfortable with it. Melnyk’s 200kg attempt moved well and she beginning to look established for the bronze. Brown took a huge opener of 235kg and absolutely smoked it. This brought her within 0.10 GL points of Stinn – it could hardly have been closer.

Stinn took 207.5kg for her second and looked a little uncomfortable on the platform, approaching and retreating from the bar a couple of times before making her attempt. She got it though and stayed ahead . Melnyk looked great with 210kg – she was clearly having a fantastic day. Brown had a bit of a wobble at the top of 247.5kg but it was a good lift, two to one, and there was clearly a lot more left in the tank.

Stinn was the first of the podium contenders out to deadlift. She desperately needed this lift to stay ahead of Brown but she had looked dizzy and out of sorts with her second. She dropped her attempt slightly to 215kg and took it all the way to the top, extending her fragile lead to 1.5 GL points. Melnyk took a 20kg jump to 230kg to try to move past Brown. The bar went all the way to the top but her grip went and she had to settle for bronze.

Brown was showing a placeholder of 250kg – this is where the biggest deadlifter holds the power – they can wait and see what everyone else does before selecting their final attempt. As expected, the change went in and Brown went up to 260kg to take the gold. The roof came off the BJCC Concert Hall as she set up to pull. The crowd was on their feet and she ripped it off the floor. Two white lights and the crowd went crazy for the home nation lifter. But wait, the jury were in discussion and they overturned the lift for lockout. Boos went up from the crowd when the news was relayed – the American team tried to appeal but the jury is the final authority and their decision stood. Not the glorious moment Rhaea Stinn would have wanted but a gold medal is a powerful compensation.