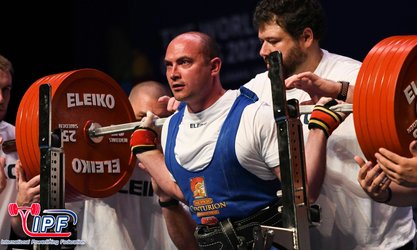 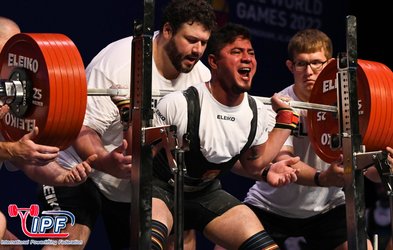 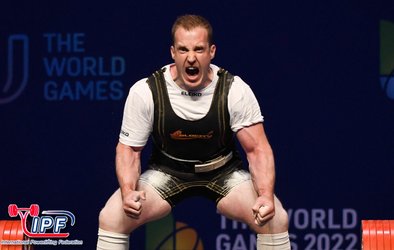 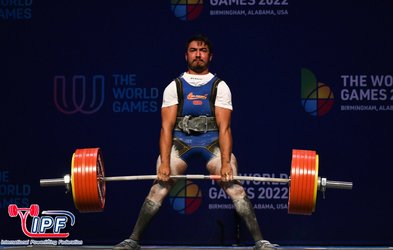 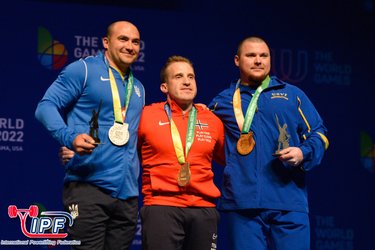 Paul Douglas of USVI led the way on squats, opening with 355kg but Mykola Barannik of Ukraine was less than 1 GL point behind with 340kg. Kjell Bakkelund of Norway took 315kg to depth on his second try and this was enough to move him all the way up to third place. Barannik’s second of 352.5kg moved really well but was turned down for depth two to one but the jury overturned the decision and gave it as a good lift. Douglas attempted 365kg for his second but missed his line on the ascent and the spotters caught him as he started to fall forward. He was still in the lead but only by 0.29 points.

There was a brief interlude when the building alarm went off but we soon got under way again.

Bakkelund took 327.5kg for his final squat to move up to second place but Barannik’s 360kg moved him into the lead by a narrow margin. This put Douglas under pressure – however his second attempt at 365kg was a masterclass of equipped squatting and he took the lead once more.

As we moved into bench press, Barannik came into his own – his opener of 245kg put him into the lead and Bakkelund moved up to second with 225kg, pushing Douglas down to third. Barannik was last out and made short work of 260kg, taking it to lockout in a heartbeat. A great finish to the bench session and small extension to his lead.

Barannik pulled an easy 280kg for his opener but Bakkelund jumped ahead with 300kg. Douglas came out next, and moved up to second place with 317.5kg.

Barannik’s second at 292.5kg was pretty comfortable and this exactly matched Douglas on GL points. Bakkelund took 312.5kg for his second, but it was turned down for lockout – shoulders just weren’t quite back. Douglas’s 325kg gave him no trouble at all but it wasn’t quite enough to get him into first place. Last lift in the second round was Alexis Maher and he absolutely annihilated 346.5kg for a new world record in the 83kg class.

The first of the three contenders out in the last round was Barannik with 302.5kg and he got it, putting him in silver medal position. Bakkelund tried 312.5kg again but this was turned down by the jury for lockout. The crowd roared for Douglas as he came out but he couldn’t get 330kg past his knees and had to settle for the bronze medal with Barannik taking silver and Bakkelund untouchable with gold. Still, the action was not over. Maher took the roof off the Concert Hall here at the BJCC with a phenomenal pull and another world record of 355kg. An exciting finish to a brilliant competition.