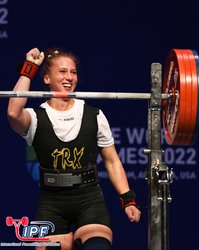 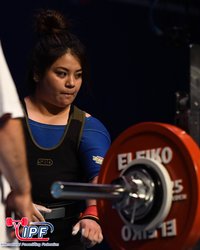 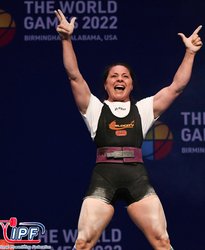 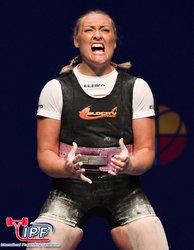 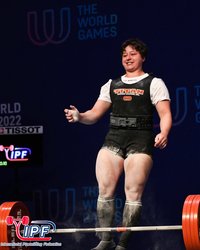 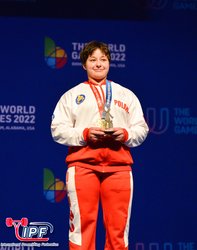 The second session of Day 2 of The World Games was the women’s heavyweight category comprising the traditional 69kg and 76kg classes. The two big favourites in this class were Sonja-Stefanie Krueger of Germany and Agata Sitko of Poland, both still juniors and both multiple world record holders.

Krueger and Sitko both selected 270kg for their opener. Krueger first and there’s no doubt that it looked heavy! Krueger’s experience and superb technique showed here and she took the open and junior world records. Sitko next and it was a tough squat – nevertheless, it was a good lift and battle was engaged.

Both selected 280kg for their second attempts. Krueger was first out again and what a grind! But the record fell once more. Sitko next but it was just a little too heavy and Krueger kept the record and the lead.

Sitko requested 280.5kg to try to take the record but there was some unfortunate confusion and back and forth between the scoring table and the jury, resulting in a delay which undoubtedly affected the ultimately unsuccessful attempt.

Onto bench and, in a risky move, Krueger opened raw with 95kg. While this guarantees you a good lift, it’s often hard to get the shirt working without any warm up. Sitko however opened with 195kg – an open world record. She handled the weight well but could not get her left arm to lock.

On her second attempt at the same weight, Sitko managed to lock it out but the lift was turned down for butt lift and the young Polish lifter looked to be in trouble. Krueger donned a bench shirt and came out for 200kg for her second but couldn’t complete the lift. This meant that McCarthy was in the lead with the two favourites nowhere in sight.

Third round of bench press and triumph! Sitko pressed 195kg for the open and junior world record and shot back into the lead. Krueger tried the 200kg again but could not get it to lock out – the risky strategy did not pay off this time and she was left with a best bench of 95kg which effectively took her out of the running for the podium.

Sitko was the last lifter out and she made history with a new junior deadlift record of 235kg, but that’s not all. This gave her a 700kg total – nearly 40kg more than the open total world record. Incredible lifting from the Polish Powerhouse. Realistically, this opening lift handed The World Games gold medal to this phenomenal young lifter as she was nearly 10 GL points ahead of her nearest rival.

Into the second round and Tavares pulled a tough looking 237.5kg for a new M1 and open world record, only just set this week by Katherine Bak at the European Masters Championships. Francesca Parello of Italy jumped to third place with a brilliant pull at 242.5kg.

The crowd went crazy for Sitko as she came our for 252.5kg to take the open deadlift record as well. It moved just as fast as her opener, leaving us wondering where the limit was.

McCarty took a nice looking 212.5kg to increase her lead over Parrello whose 247.5kg response was magnificent but not enough to get her the silver medal. Meanwhile, Tavares pushed the world record deadlift in the 69kg class up to 242.5kg.

One lift remained – 261kg for Agata Sitko. She marched out onto the platform and the crowd bellowed their support. She looked focused and calm as she set up, snapping her belt closed and adjusting the straps of her deadlift suit. She reached down, locked in the hook grip, gave a little shimmy to settle everything down and began her pull. The bar left the floor at speed , slowed a little as it went past her knees and, as she locked it out, she smiled at the top – job well done. Junior and open deadlift records, junior and open total records in the 76kg class and she moved ahead of Carola Garra in the overall best lifter contest. What an incredible performance in her first 12 months of international lifting.