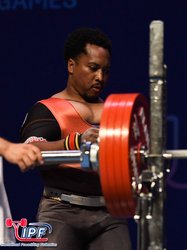 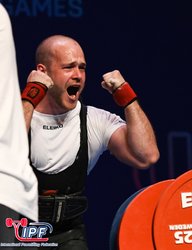 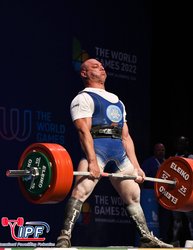 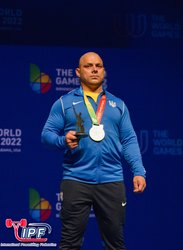 In the men’s heavyweight class on day 2 of The World Games, Niki Lentz of Denmark led from the start, opening his squat with 390kg. Volodymyr Rysiyev of Ukraine took an M1 world record in the 93kg class with 372.5kg and his teammate, Danylo Kovalov, was only half a point behind with an easy looking 390kg.

In the second round, Rysiyev extended the M1 record with a beautifully smooth 380kg and Lentz maintained his lead with 402.5kg. Kovalov was unsteady under the bar – he got the start command but lost his balance and so remained in 4th place.

Noah Johnson of USVI took the junior world squat record with 382.5kg for his third to move up to 3rd place and Rysiyev extended the M1 world record with a slow and steady 387.5kg.

Kovalov smoked 402.5kg on his final attempt but it wasn’t enough to get him back up to 3rd. The final squat of the session was Lentz looking great with 410kg to extend his lead.

Lentz and Rysiyev both missed their opening bench and Oliver Dahlkvist of Sweden shot into contention and first place with a huge 290kg opener ahead of Kovalov. Things soon changed though when Rysiyev got 270kg for the second time of asking and moved into first place. Lentz, having missed 275kg for his opener, asked for 282.5kg for his second but this went no better and left him in trouble with nothing on the board going into round 3. He attempted the same weight again but it went off line and he dropped out of the race.

Only 0.3 GL points separated the top three going into deadlifts with Dahlkvist leading Kovalov and Rysiyev. Kovalov moved into first place with his 305kg opener but that only lasted until Rysiyev came out for 327.5kg and leapt a clear 4 points ahead. USVI’s Ian Bell opened with a monster 360kg pull which was enough to move him into second place.

In the second round, Kovalov looked strong with 315kg which put him in third. Rysiyev pulled an M1 world record of 345kg to extend his lead but it was a tough lift and he looked like he didn’t have much left. Holding second place, Bell pulled a strong 370kg and looked set for the world record on his final deadlift. He made a great attempt at it but it was not to be and, as none of the podium contenders were successful with their final lift, the places were set with Rysiyev taking the gold, Bell the silver and Kovalov the bronze.