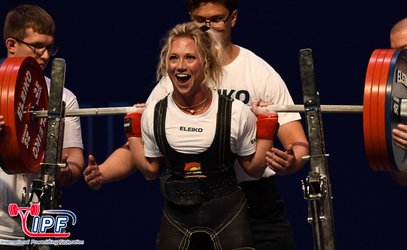 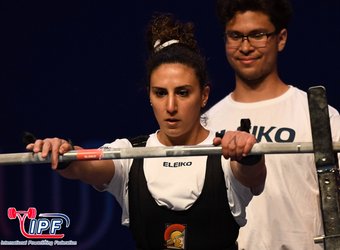 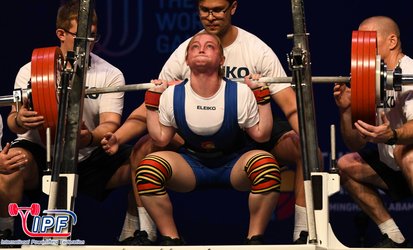 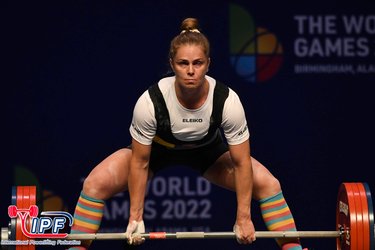 The last session of Day 1 at The World Games 2022 was the middleweight women – 57kg and 63kg classes.

Carola Garra began in style with a new world record in squat of 245kg for her opener. In round two, Taylor LaChapelle of USVI attempted to join the party with an attempt at a junior world record of 240kg. Although it looked easy, it was turned down for lack of depth. Meanwhile, her team mate, super smiley Kimberly Johnson, moved into third place with 207.5kg, pushing it up to 215kg on her third. LaChapelle went up to 242.5kg for her third and nailed the record! She was only followed by Garra who made 260kg look comfortable – an incredible lift, putting nearly 20kg on the record.

Garra opened her bench with 170kg, establishing a clear lead over LaChapelle and Johnson with GBR’s Ellie Steel in fourth.

Ukrainian legend, Larysa Soloviovia, came out for her third bench with nothing on the board and the support from the crowd in Birmingham was incredible – she got it and shot up the table into 4th place. Garra’s second try at 175kg made you wonder what happened the first time – three red plates moved so well.

We saw an absolute masterclass in the first round of deadlifting with lifter after lifter absolutely smoking their opener. When the dust had settled, LaChapelle had a new junior world record with 227.5kg and was sitting in second place and only a couple of GL points behind Garra, having incidentally extended her own junior total world record as well. There was a bit of a gap to the lifters behind but a real tussle was developing for the final podium place with Soloviova just ahead of Johnson and Huang.

In the second round, 195kg for Johnson moved her up to 3rd place but Soloviova responded with 212.5kg to take the place back. LaChapelle attempted 237.5kg but couldn’t get it moving, leaving her 4.5 GL points behind Garra.

As we moved into the sharp end of the competition, Johnson, sitting in fourth, came out for 205kg to try to snatch a podium place. She looked uncharacteristicallty serious as she set up for the pull. She got it moving well but could not lock it out, leaving her in fourth place. Soloviova, assured now of the bronze and not needing to defend, dropped her attempt to 217.5kg and made it look like an opener. Garra topped off a fantastic day with 222.5kg for a new total world record of 657.5kg - a tour de force performance and her first World Games gold.