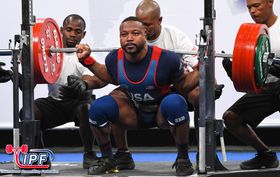 The 83kg A group lifted back to back with the 69kg women in our second prime time session of the classic world championships and it did not all go according to expectations.

An early rivalry started up when UK’s Jurins Kengamu matched USA’s Delaney Wallace squat for squat at a slightly lighter bodyweight and snatched the squat gold. Tim Monigatti of New Zealand struggled for depth and only had one squat passed which put a serious crimp in his world championship race.

Bench press world record holder, Owen Hubbard of the UK, climbed the ranks with a 202.5kg opener, a good 20kg higher than anyone else in class. He added 10kg to it in the second round but couldn’t quite manage to extend his own world record with 219kg. Wallace pulled ahead of Kengamu with a 192.5kg bench for the silver with Jack Soderberg of Sweden taking the bronze.

Going into deadlifts, Hubbard’s lead was immediately overturned. As is so often the case, the last man out to bench was the first man out to deadlift. The Wallace/Kengamu face off returned with both opening on 302.5kg. Monigatti pulled himself up into third place with an easy looking 305kg but the big story was the Hungarian junior, Asein Enahoro, opening on an open world record of 345.5kg and making it move like the empty bar.

In the second round, Hubbard took a risky 30kg jump to move up to second but Kengamu took it back with 320kg. Wallace’s 315kg deadlift took him up to an 802.5kg total and he started to look unassailable in first. Monigatti pulled 330kg easily but his day deteriorated further when it was turned down for failure to get his shoulders back at lockout.

Enahoro requested 362.5kg for his second attempt and moved it just as easily, smashing the world record deadlift to pieces and gaining 3rd place overall - an incredible pull.

Hubbard came out first in the 3rd round but his 302.5kg attempt was not to be so he could not improve on fourth place. Wallace was out next but missed 322.5kg – did this leave the door open for his rivals? Kengamu tried the same weight but also missed. Enahoro initially had 372.5kg listed for his third attempt to move into second but an audible gasp went up for the crowd when he changed his attempt to 385kg to try to take the title on bodyweight.

The roof came off the hall here in Sun City as this junior lifter approached the bar. Regardless of national affiliations, the crowd went crazy for the young man from Hungary. It flew to his knees, his left leg locked, the bar skewed but he kept on pulling. It went to lockout but it was just too uneven and it sprang away from him and hit the floor. You have to admire the spirit that shoots for the moon rather than trying for second and it looks like this weight will be in his grasp very soon.

With that, we crowned Delaney Wallace with his first world title right at the end of a brilliant battle.