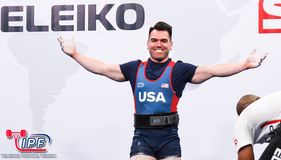 The 74kg class A group lifted back to back with the 66kg A group in the first Prime Time session of the Classic World Championships.

No one had any doubt that USA’s Taylor Atwood would dominate this session but he began in a subdued fashion, opening behind five other competitors, including the UK’s Dylan Nelson who took the European squat record with his opener of 270kg and then took two swings at 283.5kg for Atwood’s world record – it didn’t quite come off this time but we’re sure he’ll be back for another go very soon. Atwood sailed past with 277.5kg, moving into the lead and picking up his first gold medal of the day.

Atwood did what he needed to do to take the bench gold on bodyweight with silver going to Matti Christensen of Denmark and bronze to Tatsuya Kawashima of Japan, both from the B group.

At sub-total, Atwood was already 55kg in the lead. Clinton Lee of Singapore was his nearest rival with Canada’s Blake Barrett only 5kg back. However, France’s Paul Rembauville pulled himself into contention with 295kg, matching Barrett’s 715kg total with Lee only 2.5kg ahead. In the second round, Rembauville pulled 310kg to move into second place, ahead of Lee.

Tension mounted as we moved into the final round of deadlifts. Germany’s Joshua Wright, having flown under the radar so far, pulled 305kg and moved into second place on bodyweight. Barrett came out next for the same weight but to no avail. Lee tried next but with the same result. Rembauville succeeded with 312.5kg and moved back into second place, pushing Wright down to third overall. Last lift of the day and Taylor Atwood sealed the deal with 315kg, just enough to take the deadlift gold and finish half a kilo off his own total world record. A measured and dominant performance.