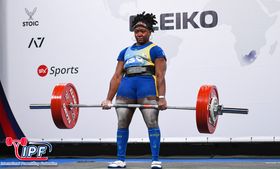 Our second prime time session at the Classic World Champions had the 69kg women and the 83kg men lifting back to back.

Marte Kjenner of Norway looked incredibly strong on squat, opening on 180kg and pushing all the way up to 197.5kg for her third. This was good enough for the squat gold but incoming world champion, Chandler Babb of US Virgin Islands, was only 5kg behind, promising us a close battle.

Chelsea Savit of America excelled on bench and took the gold with 122.5kg but Kjenner was only 5kg behind, nailing 120kg on her second attempt at the weight. Agnes Rudin of Sweden missed two attempts at the junior world record of 117.5kg but her opener was still good enough for the bench bronze.

At sub-total, Kjenner led Babb by 17.5kg with Savit only 2.5kg behind and Horna another 5kg back. However, this was Babb’s time to shine. She opened her deadlift with a massive 230kg, catapulting her straight into the lead with 530kg, leaving Kjenner 7.5kg behind. Clara Peyraud of France climbed the ladder with her 205kg opener, taking the junior world total record and matching Horna on 492.5kg.

In the second round of deadlift, Kjenner closed the gap to only 2.5kg and put real pressure on Babb. Peyraud took the junior deadlift world record with 215kg with Horna only ahead of her on bodyweight.

With everything still to play for in the third round, Savit attempted 207.5kg to take second place but it was just too heavy and wouldn’t break the floor. Horna was next for 220kg and got it, solidifying her bronze medal position. Next out, Kjenner attempted 225kg to take first place from Babb. She pulled it all the way but, heartbreakingly, her grip went right at lockout, confirming Babb as the two time classic world champion.

But we were not done yet! Peyraud attempted 227.5kg to move up the places but it was just too much. Already unassailable, Babb calmly approached the platform for a world record deadlift attempt at 242.5kg. It went past the knee but no further. A great effort!