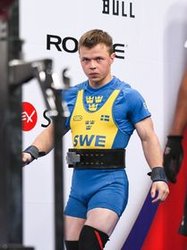 The first prime time session of the World Classic Championships saw the 66kg and 74kg classes lifting back to back.

In the 66s, Panagiotis Tarinidis of France was the incoming world champion but he came into the competition recovering from injury and was ill when he arrived in South Africa. It was clear from the first squat that he was not in good shape so this really opened the field up in the 66s.

USA’s Jonathan Garcia impressed in the squat, taking the world record at 263.5kg on his second attempt and then pushing it up to 271kg on his third. Eddie Berglund of Sweden looked very strong and took the squat silver with 250kg. Pana, looking ill, ground through a tough 250kg to match his best squat in this class and took the bronze.

Berglund came into his own on bench, opening 30kg ahead of anyone else and finishing on 202.kg, shooting into the lead. Garcia struggled a little, only getting one bench on the board and, at sub-total trailed Berglund by 11.5kg. Kyota Ushiyama of Japan pulled himself into contention with 170kg and found himself in a three way fight for overall third with Tarinidis and USVI’s Joe Jordan.

Berglund extended his lead with his opening deadlift of 240kg but Garcia came under pressure from the three behind who all opened 30kg heavier. Berglund looked unstoppable with his second deadlift at 250kg but Tarinidis struggled and slipped out of contention when he failed his second and third pulls. A shocking turn of events.

Going into the third round, Jordan and Ushiyama were tied on 685kg and Garcia was on 688.5kg. With Berglund only 14kg in front, everything was still up for grabs. Garcia took the decision that he was defending silver rather than shooting for gold and pushed his total out another 7.5kg and retreated to the back to watch the final stages of the competition unfold. Berglund came out next for 257.5kg, taking the total world record and confirming his first open world title. Both Ushiyama and Jordan attempted to pull for the silver but both missed, giving Ushiyama the overall bronze.

Today Eddie Berglund proved that he was not just a bench specialist but the best 66kg powerlifter in the world.