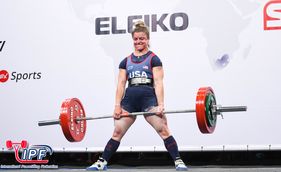 We had drama in the 63kg class even before we started when reigning world champion Prescillia Bavoil did not make weight and was out of the competition before she even started. This changed the landscape of the competition dramatically and provided unthought of opportunities for the rest of the field.

Iris Scholten of the Netherlands opened with an easy looking 182.5kg squat and 192.5kg for her second barely looked any harder. 197.5kg for her third however was a step too far. However, this gave her a handy lead going into bench. Behind, the returning Meghan Scanlon of USA took the squat silver with 180kg, beating Italy’s Chiara Bernardi to it on bodyweight. Bernardi’s team mate and perennial rival, Sara Naldi, slipped a little behind when she wobbled a little with her second squat, causing the bar to dip slightly. She hit it on her third but lost the opportunity to squeeze out a few more kilos.

Scanlon really came into her own on bench, opening with a massive 125kg, fully 15kg ahead of Bernardia and Scholten. It was her only successful bench however and Scholten quietly got all three of hers in, finishing only a little behind on 120kg and taking the silver medal with Bernardi scooping the bronze with 115kg.

At sub-total, Scholten was 7.5kg ahead of Scanlon with Bernardi another 10 kilos behind and Naldi falling out of contention, nearly 20kg behind. After the first round of deadlifts, the three front runners were tied on 495kg and suddenly bodyweight was very relevant indeed. Meghan Scanlon was the lightest by a considerably margin and Bernardi was 150g lighter than Scholten giving Scholten the most work to do to take the win.

All three successfully added 10kg to their account on the second round of deadlifts so it could not have been closer going into the final round. Scholten came out first for 195kg but couldn’t quite lock it out meaning that she could not improve on bronze. Scanlon was next but couldn’t get 205kg past her knees. This opened the door to Bernardi who fired out onto the platform like she’d been shot from a cannon but, despite her intensity, 212.5kg just wasn’t there on the day and Meghan Scanlon was crowned the 63kg world champion.