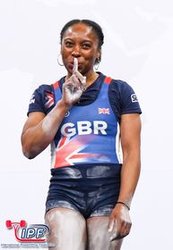 The 57kg class gave us the closest competition yet at the Classic World Powerlifting Championships, here in Sun City.

We are accustomed to this class being the Joy Nnamani show but, for once, she did not have it all her own way. Three time world champion and world record holder, Nnamani was nominated a good 20kg ahead of her nearest rival. She gave us a shock though by failing her opening squat on depth and Canada’s Maria Htee shot to the front with a strong looking 170kg with junior world champion Jade Jacob of France and GB’s Bobbie Butters just behind on 167.5kg. Joy’s second looked a bit better but still wasn’t deep enough and Htee surprised by missing 180kg, giving Butters the chance to creep ahead with 177.5kg.

Joy came out for her third squat looking remarkably relaxed with nothing on the board and the whole hall held their breath. A sigh of relief when it was noticeably deeper was cut off when the ref’s lights flashed on – two to one no lift! Joy Nnamani was out of the competition! But wait, the jury conferred and, within moments, the overturn was announced. Good lift for Joy Nnamani and the relief was palpable. There is no question that Joy is the one to beat but no one wanted it to happen like this.

While we were still reeling from the drama, Jacob extended her own junior world record and took the squat silver with 172.5kg. In the last lift of the round, Bobbie Butters stormed the platform like an avenging angel, screaming defiance at gravity and absolutely smoked a new world record of 183kg, gaining the squat gold medal and a useful chip in the process.

Butters pushed further ahead with a solid 110kg bench and Sweden’s Donna Berglund jumped up to second with a world record bench of 123kg, taking back the single lift record as well that was broken in Kazakhstan last week. Evie Corrigan took the bench bronze with 102.5kg, matching Jade Jacob at sub-total at a slightly heavier bodyweight.

However, it was now time for the deadlifters to shine. Jacob made short work of 195kg, taking the junior total world record, and Nnamani came in hot with an astonishing 212.5kg opener to put them both on 465kg with Butters starting to lose ground. Jacob broke her own junior world record with 202.5kg on her second but Nnamani was back on form and extended her own deadlift world record to 223.5kg, pulling out in front by a small margin. Htee pushed ahead of Corrigan with an easy looking 195kg pull – Corrigan tried to respond with 197.5kg but it wasn’t quite there.

Into the third round and this was just too close to call. Butters pulled a tough 185kg, giving her 9 for 9 good lifts, and moved into the lead. Corrigan went next and succeeded with 200kg where 197.5kg had failed pushing ahead of Htee once more. Htee attempted to respond with the same weight but had nothing left to give and had to settle for fifth place. Jacob moved ahead with 210kg and everything came down to the last pull.

Everything rested on Joy Nnamani taking the world record up to an incredible 228kg but she is no stranger to pulling for the win. The roof came off the hall as she calmly walked to the platform but as she raised her finger to her lips to ask for quiet, silence fell. The bar moved quickly to her knees and there was a moment of doubt as it slowed but the bar accelerated to lockout and Joy Nnamani retained her crown in one of the most dramatic sessions we have ever seen.

If you missed this, then you have missed out on a piece of powerlifting history – sessions can be reviewed on our Facebook page and the Olympic Channel. Go and watch it at once.