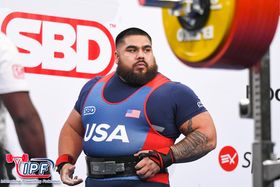 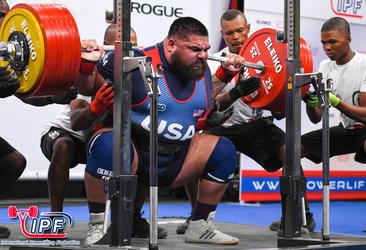 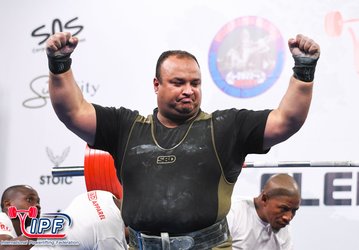 Jesus Olivares is technically in the superheavyweight class but, in the final session of the classic world championships, he was very much in a class of his own. Second squat looked easier than his first but it was turned down by the referees on both depth and soft knees at lockout. He went up to 440kg for his third but got the same result. Still, this put him miles ahead.

The fight was closer in the rest of the field with Swiss lifter, Sean Koch, being the closest on 370kg and taking the silver with Ilyas Boughalem of Algeria taking the squat bronze with 360kg.

Olivares didn’t have it all his own way on bench with the world record holder, Boughalem, opening with 265kg and covering a lot of ground, taking 280kg for his second and extend his own bench press world record with 291.5kg. Olivares took the silver with 260kg. Steve Ringoot of Belgium came into his own on bench, moving up into fourth overall but losing the bronze to Turkey’s Cenk Kocak.

Olivares’ first deadlift gave him a total of 1022.5kg and pretty much guaranteed him the world title. Kocak’s opening deadlift was initially turned down for soft lockout but the jury intervened and he was on the board with 370kg. Olivares stood 380kg up but the lift was turned down for lockout. Kocak tried for a world record of 400kg but couldn’t finish it off.

Going into the third round, Olivares was over 90kg up the road on 1022.5kg and, with none of the main contenders getting their third squat, this is how we finished the session, Boughalem on 951.5kg and Kocak on 930kg.

Full results are here and you can watch the full session here.