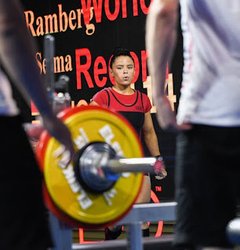 On Day 8 of the World Bench Press Championships we began the women’s open competition with the lightweight classes, and it blew our socks off!

In the 47s, Anastassiya Zhurbina of Kazakhstan and Nataliia Cheremenko of Ukraine both took 85kg for their opener. In the second round, Zhurbina asked for a junior world record attempt of 90kg and took it successfully. Cheremenko matched her, but it must have been disappointing to have missed out on the world record by a few seconds. Drama in the third round as Cheremenko moved ahead with 92.5kg and Zhurbina came out for 95kg. However, she did not manage to get a start command as her super wide foot placement was touching the bench supports and the Ukrainian kept the junior world record and the top step of the podium.

In the 52s, Selma Ramberg of Norway took an early lead. An initial strong showing from Hungary’s Monika Nyers faltered as she missed her second, opening the way for French lifter, Alison Huet, to move past. In the third round, Nyers’ attempt was overturned by the jury and this handed the silver to Huet. Meanwhile, with no one challenging for the gold medal, Selma Ramberg was free to push her own world record up to an incredible 114kg.

In the 57s Ukraine’s Anna Rykun led from the start and hot favourite Akane Ishibashi struggled. She has an unusual style with a very high arch, bringing her chest up to the bar as much as bringing the bar down to her chest. However, shock when her first attempt at 107.5kg did not move. The second try got her on the board and she posted 140kg for her third, clearly a placeholder. Rykun was in great form though. Her second at 120kg moved like the empty bar and the world record of 122kg was hardly any slower. The change went in and Ishibashi came out for 122.5kg for both the world record and the world title. A good lift! But wait, the jury were on their feet and when the replay came on, it was clear why–daylight between the bench and her glutes. Rykun kept the record and took the gold.

What a great session to start the open categories with–we could hardly catch our breath! And this is only the beginning.