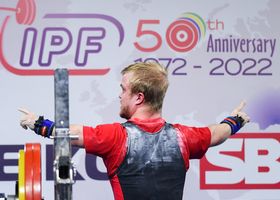 Day 8 of the World Bench Press Championships closed with the lightweight classic men and we saw drama in every class.

In the 59s, last year’s junior world champion, Ivan Kuvaldin of Kazakhstan was nominated ahead of Norway’s Fredrik Myrvang but he lost ground when he missed his opener and Myrvang shot into the lead with 157.5kg. Myrvang stalled though when his second lift was overturned by the jury for soft lockout and it looked like anyone’s game in the third round. Kuvaldin then jumped ahead with 160kg–at a lighter bodyweight, Myrvang only needed to match him to win and he looked very serious coming out for the attempt. It was a tough press but it went all the way and, after so many years of silver and bronze, Myrvang finally took his first world title.

In the 66kg class, front runner in the nominations was Wataru Tobita of Japan. However, his opener was turned down for butt lift which put last year’s silver medallist, Abdulkarim Karaman of Kazakhstan, in the lead with 182.5kg. Tobita took 205kg again for his second but the two to one good lift decision was overturned by the jury, again for butt lift which was clear on the replay. Karaman struggled, failing both 2nd and 3rd lifts which left only one question–would Tobita win the world title or bomb out? The bar went back to the top easily enough and we all held our breath waiting for the refs’ decision–two to one a good lift! Tobita wins!

We had the Kodama-Chuprynko face off once again in the 74s - this really is one of the greatest rivalries of our times. At last year’s competition, Japan’s Daiki Kodama won the equipped world title but Ivan Chuprynko of Ukraine took the gold in the classic competition. This year, we had already seen history made when Kodama lost his equipped world title for the first time. Was this the end of the Kodama era? Kodama ended up with the lighter bodyweight and higher lot number so held all the strategic cards. They both opened on 210kg and then took 220kg for their second. Game on. There was some brinksmanship with Chuprynko initially putting in a world record attempt but there was no way Kodama would be forced to come out first and, eventually, Chuprynko came out for 222.5kg, judging that Kodama had little left in the tank. Chuprynko missed the lift, crowning Kodama with his 18th world title. On the podium, Chuprynko showed as much grace as Kodama when the positions had been reversed. These two seem to enjoy pushing each other to their limits and that can only benefit those of us cheering them on.