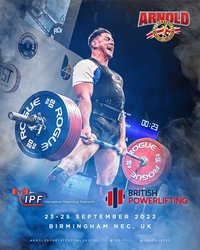 In partnership with the Arnold Sports Festival UK and Rogue Fitness, we are excited to announce that we will be back in Birmingham with a massive show this year.  Last year’s show was such a phenomenal success that this year it will be over more days, classic AND equipped and there will be more prize money than ever before!

World records are up for grabs and there is over €30,000 in prize money to be won at this year’s three day event in Birmingham on 23rd - 25thSeptember.  Prize money will be the same amount for women as for men and the competition will be scored on GL points.

Here’s how it will look:

FRIDAY will be equipped powerlifting with 16 women in the morning and 16 men in the afternoon.

SATURDAY will be classic (“raw”) powerlifting, again with 16 women in the morning and 16 men in the afternoon.

SUNDAY will be the big equipped Bench Clash with 24 women competing in the morning session and 24 men in the afternoon session.

Some of the biggest names in powerlifting will be vying for the limited places at this event - Kimberly Walford, 7 time classic world champion, who will be competing in the UK for the first time EVER, said “It’s an opportunity to step on the platform, push you to your limits, and compete with some of the best lifters in the world”  Local hero and former world champion and Tony Cliffe will also be there, fresh from The World Games in Alabama, USA.  We will be letting you in on who else is coming to Birmingham as we get closer to the event.

Don’t miss this unrivalled opportunity to see your powerlifting heroes right here in the UK!  Tickets are on sale already - visit https://w.arnoldsportsfestivaluk.com/tickets/ for yours.