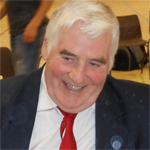 “Fred was a dynamic and key person in the success of British Powerlifting over the years. He served the sport with great sacrifice. We shall miss him.”

On behalf of the entire IPF Executive Committee, we send our sincerest condolences to the family, friends, administrators and to the athletes of British Powerlifting on the passing of Mr. Sterry. May he be remembered. Rest in Peace.