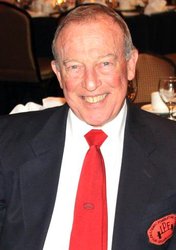 It is with profound sadness that I inform you that today, April 10, 2022, Mr. Bill Jamison passed away. Bill was an IPF Hall of Fame Member, and one of the original founders of the Canadian Powerlifting Union in 1981, where he served many terms of President.

Up to the inception of the NAPF, Bill served as regional vice-president from 1987 to 1991, and from 1995 to 1999. At the time of his passing, Bill was the longest serving IPF Category I Referees in the International Powerlifting Federation. He served on the IPF Technical Committee with his dear friend John Stephenson from 1990 to 2011.

Bill also attended every Men’s World Powerlifting Championship for over 25 years until his retirement. Bill loved the sport of powerlifting and hosted numerous local, provincial, national, international and World Championships in his hometown of Hamilton, Ontario.  The highest award the CPU presents to a member is named in his honor, titled the “Bill Jamison Award”. It is given to the member that displays the highest form of sportsmanship and dedication to the sport of powerlifting.

On behalf of the IPF Executive Committee, I offer my sincerest condolences to Bill’s family and friends, and to all of the athletes, coaches, officials and referees of the CPU.

May Bill rest in peace. We shall all miss him dearly and may he be remembered.