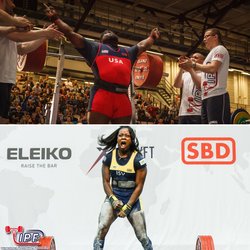 The International Powerlifting Federation and SBD Apparel are proud to announce a new category of IPF event, designed to showcase the stars of our sport in a high-profile event with the largest prize fund in the sport’s history.

The event is the first of its kind in the United Kingdom, bringing together 12 men and 12 women over one weekend to battle it out for world records and the title of Champion of Champions. Each lifter represented their own nation at the World Classic Powerlifting Championships, and will now have the opportunity to defend their place among the world’s best.

Athletes from six continents will be coming together for a truly international competition, with spectators in attendance at Sheffield’s historic City Hall, minutes from SBD’s headquarters and manufacturing base. Intended as a celebration of the sport and its history, the Sheffield 2020 Championship will see fierce competition and world records fall.  A £250,000 prize fund will be awarded on the basis of highest total, highest IPF points and world records broken.

Benjamin Banks, SBD Apparel’s CEO and founder, said: “We are excited to announce this new partnership with the IPF, which will see us celebrate the world’s strongest powerlifters in a new category of IPF event.”

“It has long been our aim to elevate the sport of powerlifting to new heights, and we look forward to welcoming lifters and fans for what we expect to be a spectacular event next March.”

Further details will be released at sbdapparel.com/sheffield

Competed in an IPF World or Regional Classic Powerlifting event.
Achieved, or reasonably be capable of achieving, 700 IPF Points.
Currently in good standing and not under suspension from the IPF.
No prior anti-doping offences warranting a ban of more than one year.