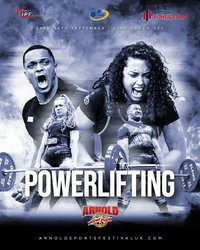 We have some of the biggest names in classic powerlifting coming to compete in the UK for the first time at the Arnold Sports Festival in Birmingham.

The men’s competition is on Saturday morning, starting at 11am and we have an incredible line up.  Ukraine’s Anatolii Novopismennyi has been a dominant force in classic powerlifting for years. Multiple-time world champion, he has current world records in squat and total in two weight classes and two age classes.  Chance Mitchell of the USA is one of the hottest new stars in the IPF, taking gold and the deadlift world record at Classic Worlds this year.  Abdul Majeed Sulayman is the top ranked raw lifter in British Powerlifting right now – these three have never met in competition before!  And they are challenged by an array of powerlifting superstars – World Champions, World Games gold medallists and World Record holders – all vying for the top prize of 3,000 euros.

If anything, the women’s class is even more stacked than the men’s.  We have eight of the top 20 raw lifters in the IPF, six world champions, two World Games gold medallists and the top ranked lifter in the UK, Joy Nnamani.  Right at the top are two French lifters, Tiffany Chapon and Lya Bavoil.  Turbo Tiff won the best lifter award at the recent World Championships, taking world records in every lift along the way.  2021 World Champion Lya Bavoil saw disappointment in South Africa though and she is all out for redemption at this competition.  Only a fraction of a GL point separates them – find out who comes out on top at 1.30pm Saturday.